Nagasaki Kunchi which is sometimes refered to as the  Nagasaki Okunchi is a festival of Suwa Shrine, held in  Nagasaki City, Kyushu for three days from October 7 to 9 each year.

The festival features unique and dynamic performances  such as “Ryuodori,” “Whale Blow,” “Kokkodesho,” “Oranda Manzai,” and “Goshuinsen,” which strongly reflect the flavor of the Portuguese, Dutch, Chinese, Vietnamese, and other cultures that have influenced the Nagasaki area.

It also shows the influence of Kyoto and Sakai, including the umboko, Hikimono (floats and danji), and Taikoiyama.

The name “Kunchi” is said to have originated from the festival held on September 9, which falls on the Chou-you-no-Sekku day of the lunar calendar (“Kunichi” in the local dialect of the north Kyushu region).

It is one of the three major Kunchi festivles in Japan, joining Hakata Okunchi in Fukuoka City, Fukuoka and Karatsu Kunchi in Karatsu in Saga Prefecture).

After each participating town dedicates its performance at the primary shrine of Suwa Shrine, dedication is also held at Yasaka Shrine, Otabisho, Nagasaki City Public Hall, and other dancing stables.

The town that is in charge that year is called Odoricho. In other words, if we look at a single town, the dancing town comes around once every seven years. However, some towns participate in the festival as a special group and dedicate only the dance (without the kasaboko) in years other than the original cycle.

Kabashima-cho Kabashima float on the move
Each dancing town leads a huge umbrella float, the symbol of the town, into the precincts of the shrine and dedicates various performances to the gods.

The topmost decoration (also known as “dashi”) is surrounded by a cloth called “dangari” (or “sagari”), and a ring surrounds it between the decoration and the dangari.
In the center is a thick bamboo pole called a shinbou, which is attached to a carrying stick.

To balance the heavy decoration, 2,500 to 3,000 penny coins are attached to the bottom of the “shinbou”.

It is a little less than 2 meters in diameter, 3 to 3.5 meters high, and weighs 130 to 150 kg.
The float is carried not by a person from each dancing town, but by a person who specializes in carrying the float.

There are six groups of float carriers, and there is also an “umbrella float association. The conductor who gives instructions to the float carriers with a small flag is called “shafuri.

Each dancing town has its own specialty. Many of the performances, such as the kawabune (river boat) and the dragon dance, are dedicated by several towns, so they can be seen almost every year or every few years, but some performances (such as the whale spouting) are performed only by one town, so they are basically dedicated only once every seven years.

An event held on June 1 to mark the beginning of rehearsals for the performance. The dancers visit Suwa Shrine and Yasaka Shrine to pray for safe rehearsals and success in the performance. In the afternoon, they make a round of greetings to those involved in the Kunchi festival, known as Uchikomi. As in the case of the garden tour, draperies are hung at nearby businesses and homes.

Costumes and tools used in the kunchi will be on display. October 3 event to begin in the evening. As with the Yard Around the Yard, businesses and households will drape draperies.

An informal event held on the evening of October 6. The name derives from the fact that people who staked out the area all night long from the previous day, and who were free to sit on the Nagasaka, which was free of charge, spent their spare time imitating the performance without permission.

This used to occur regularly, but the tradition died out when the committee banned all-night staking out of Nagasaka and a number-based ticketing system was introduced.

The dashimono performed as part of the dedication dances can be broadly classified into dances, floats, carriers, and street dances. Each of these can be performed in Japanese, Western, or Chinese style.

Various types of dances are performed in each town.

A float with wheels underneath that is pulled around. Most are based on ship motifs and are also called “boats. Dragon boats, river boats, tojin boats, gozabune, whale floats (commonly called “whale tides”), etc.

A performance performed by a large number of carriers. Dragon dance, kokkodesho (drum mountain), shachi-debaiko (or or orca drum), etc. They are not only carried like the portable shrines seen elsewhere, but are characterized by dynamic movements such as pulling the portable shrines around or throwing them high into the air and catching them with one hand.

The procession itself has its own flavor. Daimyo-gyoretsu (feudal lord’s procession), Anio-san’s procession, Mazu’s procession, etc. These are rarely performed alone today, and may be seen as part of a dedication ceremony.
In Siebold’s book “Japan,” the taiko mountain (kokkodesho) and the whale spouting are illustrated.

Shouting
Motte ko (-i)
The conductor, who is about to leave, is blocked from leaving by the conductor, who calls out “motte koi, motte koi” twice. Both arms are also raised twice. This is used as an encore.

Strictly speaking, it is said to mean “bring back (once again)” the floats or the floats that were carried out after the performance.

Shomoyare
The first is “I want to. A call for an encore to a dance, etc., said to have come from the phrase “Do it (again). It is used interchangeably with “mottekoi” above.
Hutomaware
A call made when the kasaboko floats turn. It means “turn thickly (=turn widely).
Yoiya
A call made when the kasaboko floats have made a successful turn. It is also used in Nagasaki’s unique kite flying (hata-flying) as a call of “katsudo ari” (“the game is won”).
Ryu Odori (Dragon Dance)
A representative performance dedicated at Kunchi. Currently, Kagomachi, Suwa-machi, Chikugo-machi, and Goto-machi dedicate it, and it can be seen every year (some years it is not), but the content, types of dragons appearing, and staging differ depending on the dancing town.

When all of the alternating members, the general conductor, and the dragon conductor are included, about 80 people make up the dedication dance of a single dragon.

Jade Master
Holds the ball that the dragon chases. Since the ball carriers and dragon performers are hard workers, they take turns and perform in shifts.
Ryuzhushu
Those in charge of the head are called jagashirashu, those in charge of the body are called nibanshu to kubanshu, and those in charge of the tail are called ryuboshu. The movement differs depending on the position of the person in charge.
the musician’s part
It is composed of instruments such as long trumpets, large drums, large gongs, palas, small gongs, and lotus leaf gongs.
Para Gongs
When the skin stretched over the surface is struck with a rattan stick, it makes a fluttering sound.
Small gong
A musical instrument that is sounded by lightly pressing the tip of a teak stick against it.
lotus leaf gong
A cymbal-like instrument that can be divided into three types: large lotus leaf gong, medium lotus leaf gong, and small lotus leaf gong. The large and medium gongs are sounded by rubbing them together, while the small gongs are sounded by striking them against each other.
Kagomachi no Ryuodori (Dragon Dance of Kagomachi) The musical style of Kagomachi no Ryuodori
Dragon dance in Kagomachi
The musical accompaniment of the dragon dance in Kagomachi 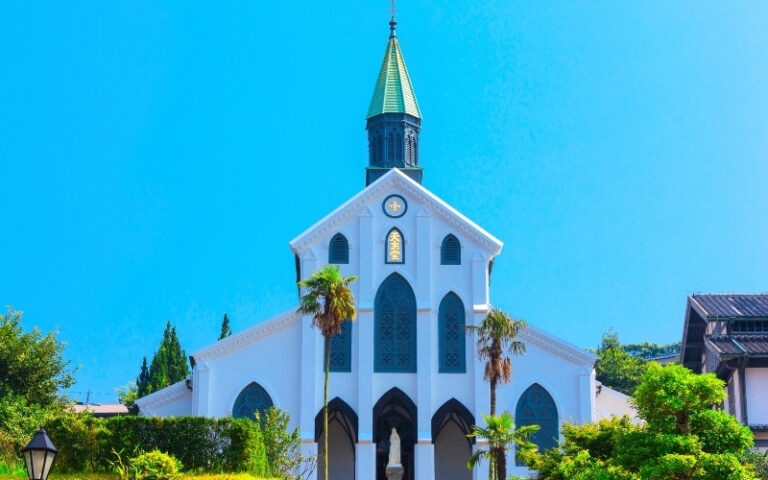 Oura Tenshudo is the oldest existing church in Japan. It is a Gothic-style church representing medieval European architecture built for foreign residents in the Nagasaki…