Aso is often referred to as a mountain range stretching from east to west with Aso Gogaku at its center, but in a broader sense, the name also includes the outer rim and crater field.

The outer rim is about 25 km long from north to south, 18 km long from east to west, and 128 km in circumference, making it one of the largest volcanoes in the world.

Mt. Aso was the first Japanese mountain to be mentioned in foreign literature and has remained famous since that time.

About 50,000 people live in the crater field, and there are three municipalities, Aso City, Takamori Town, and Minami Aso Village, with open fields, national roads, and railroads.

Mt. Aso was the first Japanese mountain to be mentioned in foreign literature and has remained famous since that time.

Aso has a long history of activity before it became the mountain it is today. 100,000 years ago, there were many active volcanoes in the area where Aso is now located. These volcanoes all erupted at the same time, spewing out volcanic ash, lava, etc.

When this activity ended, a large cave-in occurred, giving rise to the original shape of the present outer rim of the mountain.

It is said that between 30,000 and 50,000 years ago, the mountains of the Aso Gogaku (five peaks) erupted in an east-west alignment.

Aso is so famous that people generally refer to the sightseeing at the crater of Nakadake (Mt. Aso). The sight of the volcanic fumes violently erupting with the rumbling of the earth is a powerful reminder of the breath of nature. The bare lava rock surface and stripes on the crater walls are beautiful.

There are seven crater remains surrounding the current crater, which has been active for a long time.

The craters are arranged in a north-south line in the shape of a human ear, stretching 400 m from east to west and 1,100 m from north to south.

The status of entry restrictions around the Mt. Aso Nakadake Crater, where visitors can see the crater, is distributed in real-time.

(Note: Entry is restricted to an area approximately 2 km from the crater due to the crater area warning (eruption alert level 3, mountain entry restrictions). (Since October 20, 2021)

(Note) Because the Mt. Aso Park Road is within 1 km of the crater, it is closed to traffic depending on volcanic activity and other conditions (e.g., eruption alert level 2 or higher, large amounts of volcanic gases, dense fog, etc.). Please check the “Aso Volcano Crater Regulation Information” on the upper page.

Mt. Aso Crater Shuttle
This is a round-trip bus service on the “Mt. Aso Park Road” that connects the Mt. Aso Kamigami Plaza and the parking lot next to the Nakadake Crater.
(Note: When voluntary restrictions are imposed around the crater or when the eruption alert level is raised to 2 or higher, the Mt.
Round trip: Adult 1,000 yen Child 500 yen
One way / Adult 500 yen Child 250 yen

The torrential rain disaster in northern Kyushu in July 2012, the Kumamoto earthquake in April 2016, and the explosive eruption of Mt. Aso Nakadake in October 2016 have caused slope collapses and sediment spills. Please be careful when climbing the mountain.

Takadake, the highest peak in Aso, is a rounded cone. The southwestern side is a continuation of Nakadake, and the other direction has a long slope, and the eastern side is connected to Nekodake, and the saddle is called “Hinoo Pass”. The saddle is called “Hinoo Pass.” On the north side, there are spacious and beautiful pastures such as Kobori Pasture, Futatsuka Pasture, and Izumi Pasture.

The summit of the mountain has an elliptical old crater surrounded by a wall 400 m east to west, 100 m north to south, and 10 to 30 m high. The bottom of the crater is flat, and in the northern part, a cluster of Reverdin’s Blue flowers bloom from late May to early June, spreading like a carpet.

The northern slope of the summit is a steep rocky slope with “Eagle Peak” and “Tiger Peak,” while the western slope to the Senkan Gorge shows the remains of layered linear lava flows.  The view from the summit is magnificent, with Mt.

Nekodake is the easternmost of the Aso Gogaku (Five Aso Mountains), with a sharply pointed summit like the blade of a saw, making it an eye-catching mountain with a unique appearance. It has a complex topography with deep valleys carved radially from the summit. It is believed that a large crater existed here in ancient times, but it has been destroyed by erosion.

The mountain has a beautiful conical shape, and the entire mountain is covered with shrubs and bushes, which make the mountain beautiful in each season: young leaves, green leaves, red leaves, and ice on the trees.

The area between the West Peak and Tengu Iwa is rocky and dangerous, so climbers should be careful.

The summit of Mt. Eboshidake is narrow and steep, covered entirely with grass, and has a gentle sloping slope to the west. On the northern slope is a side volcano of Kusasenri.

A well-shaped stratovolcano located on the westernmost side of the five Kishimadake peaks. There is an old crater 200 m in diameter and 50 m deep on the summit, an explosion crater on the west, and an oval-shaped old crater with the longest diameter of 50 m called “Ko no Miike” on the eastern slope. The bottom of the crater is 50 m deep and is flattened by volcanic ash.

Kishimadake and the northern parasitic volcano, Oyudake, also have beautiful scenery with radial valleys developed on their mountain bodies. The western and central craters are almost circular, while the eastern crater is irregularly oval.

The slopes of the two mountains come together near the seventh station, and the long slopes are covered with grasslands where cattle and horses graze. 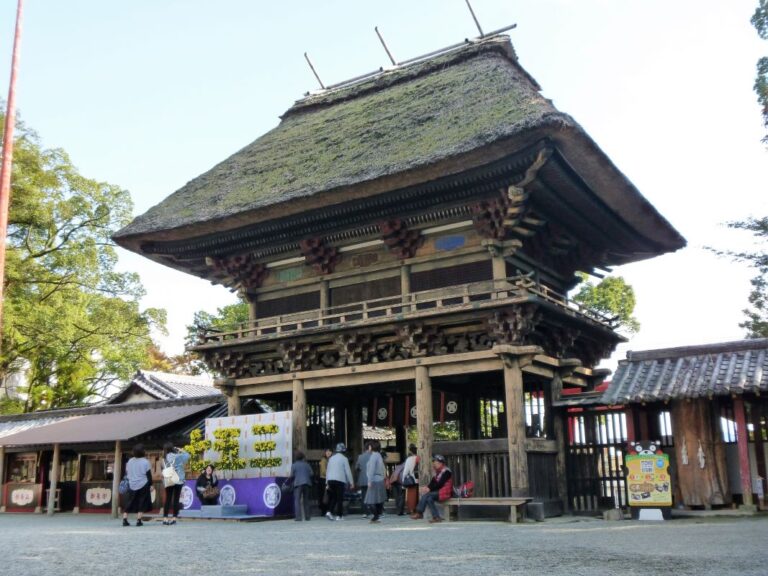 Aso Shrine is an ancient shrine and has a history that goes back through the ages of over 2,000 years. It enshrines 12 family deities,…